The NO PART OF IT Interview series was a strain of questions sent to a number of different people between February and March 2019. Each entry was scheduled chronologically to be thrust upon the world on a monthly basis since then. Each individual is introduced informally as if they were being discussed at a bar. 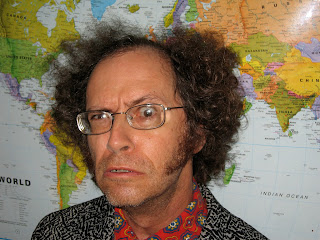 Scheduled February 18, 2019
Little Fyodor has been active since the early 80s, either under his solo moniker (more recently performing with his equally charismatic partner, Babushka), or as a member of oddball cassette culture icons Walls of Genius, and some other appearances with various projects.  To my eyes, he has singularly mastered the ability to make being socially awkward and uncomfortable look fun and humorous; a sort of polar opposite "life of the party" gone full circle.  For something like two or three decades, Fyodor hosted the Under The Floorboards radio program on KGNU, airing only material that was sent to him by "the insects".   I think Little Fyodor's album Idiots Are Closer To God was the first thing I pulled on my first appearance on WZRD.  We (myself and the other DJ) played the first track, You Give Me Hard On, and were both kind of blown away by how it was able to be simultaneously unhip, yet infectious.  So many people have tried at this and failed, and to this extent, it would be reasonable to think that a lot of punk bands looking for a gimmick heard Little Fyodor in the late 80s and fell horribly short of matching his, um, character.  Later on, I found out that he and Babushka visit Chicago around Christmas, and we did a show around then every year for a few years.  He and his mate Babushka have hosted me on my trips to Denver for Denver Noise Fest numerous times.  He also played slide whistle and did a twisted cover of Glad by Cream with me once.  It is something he'd done before with Walls of Genius, but it was a fun little romp.  I've always wanted to interview Little Fyodor, but what can I say, it would be awkward...

Feet, I've been into feet lately, feet and silicon.... Oh wait, you don't mean that!  I listen to WFMU whenever I'm home, I've been embarrassingly listening to the Beatles channel in the car, I've been recording a few new songs hoping my vocal chords will cooperate, I'm a slut for pop history books and animal violence shows on TV.  I like our cat a lot too, he's on my lap right now....  Oh wait, you don't mean that!

Is anyone really going to say their art is a hobby??  Of course, if you say you're an artist you sound all pretentious....  Okay, sure, it's a hobby!

Weirdo punk?  Two of my latest songs are kinda slow and ethereal and hardly punk and another has a kind of classic rock riff.  Okay, just weirdo.

It's random.  Either songs come to me or they don't, I have no control over it.  And I just go with whatever comes to me.  Luckily nothing very complicated comes to me or I wouldn't be able to do anything with it....

Anti-reductionist.  (Which is why I can't answer that question, it's just too complicated.)

6.  Do you believe in psychics, magic, ghosts, or gods?

Walls Of Genius is sort of a former project and current maybe side project.  Been working on preserving the legacy a lot lately, whether I'll ever contribute to a new release again is an open question.

Can I just have WFMU?

Crawling through the hallway to the kitchen pretending to be a dog.

Re people I don't know, oh yeah, sure.  Lennon beat some women?  No prob!  Of course that was fucked up, but we all have multiple personalities, so you appreciate the part of the person that, um, you appreciate.  The ugly parts of them don't matter to that.  Re people I know, oh man that's a lot tougher.  And if you know someone, then you almost have to know their shortcomings!  Damn....
Posted by Arvo at 3:33 PM