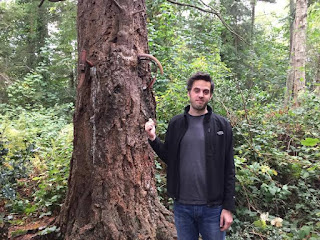 Scheduled on February 17, 2019
Blake DeGraw heads a collective called Fhtagn, where he usually provides contributors with a file to play along with as cues, with various different directives in mind.   I think I have taken part in Fhtagn around a dozen times now.  The first time I performed with his group, was in the middle of an empty parking lot behind a warehouse with ten violin players.  Most recently, there was a piece for 12 guitars, loosely inspired by the short lives of cicadas.  Prior to that, performers would try to read aloud tongue twister limericks, and if they failed to read its variations, they were instructed to scream vulgarities.  Other times people sang choir to ascending and descending sine waves.  Another one of his projects, Plancklength, did a sound installation which involved at least six large swinging metal tubes which operated on an axis, as they related to speakers and mics strategically placed.  The idea was to have an integrated feedback instrument within the space, but I think the venue restricted volume levels early on.  Still, many of those attending were plugging their ears for much of the time.   Blake and I have done a split cassette and recorded a significant amount of material at Cornish College, where he is a student.

1. Russian video games, big time. Pathologic HD, 35mm, The Underground Man, The Void. Those fuckers make a mean game. Pathologic might be the single greatest piece of art I've ever consumed. Oh, and I've been getting really into this opera called The Devils of Loudun by Krzysztof Penderecki.

4. I was really into rock music. Then I lost interest in rhythm and tonality.
5.  How would you describe your philosophy?

5. Our brains are in control and "we"' are just along for the ride.
6.  Do you believe in psychics, magic, ghosts, or gods?  If no, then maybe you'll share your favorite conspiracy theory (whether you believe it or not).

6. Psychics: no, but that'd be neat. Magic: sure, in the sense that I don't know how anything works anyway. Ghosts: no (double no if they're wearing clothes). Gods: no.
7.  What would you say was your most definitive experience?
7. I was raised by devout creationists. One day I was in an Indian restaurant with my at-the-time wife (also a devout creationist) and was looking across the room at an elderly couple in a booth. It suddenly occurred to me that we're all apes. I broke out into a cold sweat, looked at my wife and wondered what I had done.

8.  Do you have any side projects that I am not aware of? If not, what is something you'd like people to know about you, that you don't think anyone would ever ask?
8. I'm slowly learning how to develop video games so I can make an adaptation of a Shane Carruth screenplay called "A Topiary". Maybe in like ten years.
9.  Would you care to name any theoretical "desert island" records, or at least releases that you think are approaching your concept of "perfect"?

9. I don't dabble so much in records, but I'd say just about any recording of Charles Ives' 4th Symphony, or Pithoprakta by Iannis Xenakis.
10.  What is the earliest childhood memory you can (or are willing to) recall?

10. Some moustached dude somewhere in the south (I think Arkansas or Louisiana) asking me if I like Mickey Mouse. I think I was two.
11.  Are you able to appreciate other peoples' creative work regardless of their personal shortcomings or inherent flaws?  To what extent?

11. As much as it pains me, yes, to the extent of...time, I guess? I mean, I tried watching the movie L.A. Confidential the other week, and I had forgotten Kevin Spacey is in it, and I felt gross watching him so I turned it off. But on the other hand, I listen to Carlo Gesualdo's music without batting an eye. So what's up with that?


12.  Do you have any heroes or heroines?  Who are they?  Feel free to add anything that makes them stand out.

12. George Ives (Charles Ives' father). The guy's family owned like half of the town he lived in. Like, dynastic. But he just worked menial jobs and spent his time putting on really crazy experimental concerts (this is the 19th century, mind you). Died poor and young. Most of Charles Ives' best works were just attempts to re-create his father.
13.  What would you like to have on your epitaph?  Or what is your favorite quote?