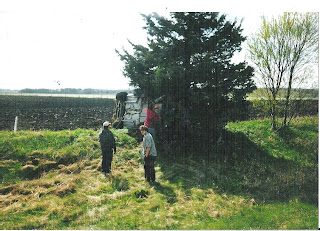 Scheduled March 2019
Bob Bucko Jr, or "BBJR" for short, seems to have an endless amount of time for creative activities, one top of at least two jobs.  He's constantly running his label Personal Archives, dealing with side projects and one-off collaborations, tours, and writing for the online zine, RUIX.  His work either solo or with the outfit Sex Funeral has a "home taped" feeling most of the time, and other than that it varies from instrumental music leaning heavily on ambient themes to singer/songwriter mannerisms, to creations for electronic percussion to expert sax skronk to Hendrix style guitarscapes, or just in general busy-bodied home recordings on a four-track recorder.

1.  What kinds of things have you been getting into lately?

I’ve been trying to accept myself as a person living in a body. I’ve also been getting into letting go.

I don’t make money, so it’s not a ‘job’, but it certainly feels more essential to running my machine than ‘hobby’ would imply.

I let my eyes roll back in my head and give in to whatever’s coming out.

I severed all the tendons in my left hand on January 30, 2012. Then I began to really understand how to play instruments.

6.  Do you believe in psychics, magic, ghosts, or gods?  If no, then maybe you'll share your favorite conspiracy theory (whether you believe it or not).

I recorded for years as Assumed Names Workshop, but only three people know that (or did until now, anyway.)

“Imperfect” albums are more interesting to me, usually. The perfect band, however, is Dead Moon. The ultimate distillation of what they professed to be.

I about 3 or 4 years old, new to the neighborhood. Kid knocked on the screen door, asking to play. I opened it and bopped him in the nose.

While “to what extent” covers factors like severity of action/flaw and whether the person can financially benefit from my appreciation, I will also admit that is likely an ever-changing goalpost based on my levee of admiration for the work.

All my heroes/heroines are (considered) peers. I look to a lot of people I respect to help understand how to navigate this odd lifestyle, but I try not to idolize anyone. See question #7.