Very kind and thorough people.
Posted by Arvo at 5:49 PM No comments: 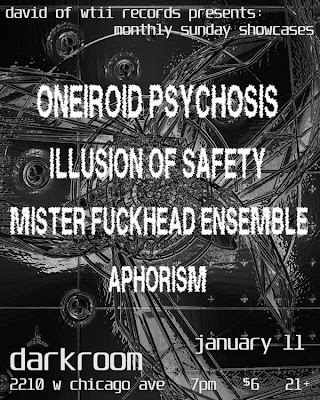 This incarnation of The Mister Fuckhead Ensemble will feature brass elements, electronics, scrap metal, and a great deal of percussion.

Oneiroid Psychosis:Oneiroid Psychosis, originally a duo between brothers Lars and LeifHansen, is now a darkwave solo-project from Wisconsin by Lars. Originallyknown simply as Psychosis, they were discovered by Decibel Records in 1993and have been making music using the name Oneiroid Psychosis since.Because a band called Psychosis already existed, it was necessary for thebrothers to change their name to avoid confusion or legal conflict, hencethe addition of the word "Oneiroid," which comes from the Greek word"oneiros" which means "dream".OP's first album, Stillbirth was released in 1995. Four songs from TheTime Spent Dead were included on the album, two after being re-recordedentirely, and two after being remastered. Stillbirth was re-released onCOP International in 2003.

After Stillbirth, OP released two more CDs on Decibel in 1996: A single,called Assuage and the album Fantasies About Illness. After these tworeleases, however, Decibel and Psylabs (OPs recording studio) both moved,which resulted in a number of complications regarding the next album,Garden of Remembrance. OP was forced to separate from Decibel, but aftersome time, they found a new home with Nilaihah Records.

The album featuresguest appearances by Kristy Venrick of The Azoic and Shikhee of AndroidLust.The fourth album released by Oneiroid Psychosis was originally a "topsecret project".

Lars and Leif wanted to make an album without any outsideinfluences. They recorded the album while building a new studio.Eventually, the secrecy of the project became less important: passion wasparamount. As their new studio was completed, so was the album.

DREAMS(with pollutions when virile) was released in 2001 by COP International.A re-release of 1995's Stillbirth was followed by OP's fifthfull-lengthalbum, Forever is Forgotten.

At this point, working together on musicbecame more difficult for the brothers: they no longer lived together,Leif had a new baby and both were involved with Albion Swords, asword-making company. They managed to find the time, however, to completeForever is Forgotten.

Fast forward to 2008 and you will see the launch of a web store forOneiroid Psychosis (which is located at www.psylabstudios.com) and thereleaseof the new cd Sentient.

OVERVIEW Illusion Of Safety has been the ongoing project of Daniel Burkesince 1983, working with numerous individuals in various combinations ofone to 10 members. Their work has been continually evolving, neversettling into an easy niche. Each collaborator has brought their ownunique perspective to the project. Since 1991 IOS have released 20 CDs onlabels such as Die Stadt, Silent, OddSize, Staalplaat, Soleilmoon,Manifold, Tesco, Ossosnossos, and Complacency. At times their work hasbeen called ambient, post-industrial, electro-acoustic, electronica,noise, sound collage, improvisation, and power electronics.

CURRENT POSITION Daniel Burke is currently working with electronicsynthesis, computer composition, and manipulation of historical musicalreferences and highly amplified handled objects. Burke usessemi-recognizable preexisting structural elements and rearrangements ofthe "language of error" to convey external stimuli and personal internalcontext. The results are destroyed music, broken sound, disturbed ambienceand the quest for the sublime.DANIEL BURKE'S ARTIST STATEMENT: The work represents not only my internalworld but the world as I perceive it. I work toward truth and often usebrutal honesty in mirroring my own state of mind and what I experience ofsociety & civilization.

The work represents my interest in the duality,contradictions, and ironies of the world we live in, the human conditionand my own state of mind.

I explore my fascination with the necessities ofbalance and the nature of dichotomy: chaos vs. tranquility, sacred vs.profane, subtleties vs. obviousness, and the ugly vs. an all pervasivebeauty. My hope is that other people can relate to the work on anemotonal, and intuitve level, while appreciating my aesthetic interest inexploring the inneffible.

THE MISTER FUCKHEAD ENSEMBLE:Mr. Fuckhead is the mastermind of one Arvo Fingers, who is not only a liveperformer, but also chicago's leading dj for music that falls into the"experimental,noise" category. Probably best known for releasing thenow-sold Trunculence Locked Groove Seven Inch Record which hadcontributions from such bands as Crash Worship, Nurse with Wound,HeliosCreed,Mykel Boyd,Cock E.S.P, Emulsion and many more.

The live version of this incarnaion is often referred to as The MisterFuckhead Ensemble. Members range from Three to Eight depending on what isplanned for the evening. Tonight's show arrives with the expectations ofat least 3 drummers/percusionists to keep true to Arvo's"industrial"roots.

Mr. Fuckheads live performances are always loud, incedinary, uniqueand unforgettable and have they have brought their unique interpretationsto play along side many of the noise scene's biggest names. One thing issure is that if you are missing old skool bands such as In the Nursery,Controlled Bleeding, or Einstuerzende Neubauten then Mr. Fuckhead is foryou.

APHORISM:Aphorism's Josh Pyle is no stranger to electronic music. Drawn to thedarker end of its spectrum in the early 90's, Josh spent years in theIndustrial music scene.

Involved in a number of projects, Josh relocatedfrom Texas to Chicago in 2000. With a music background spanning well over15 years, Josh's project Aphorism began to take off in 2005. "Whenworkingon a new track, it usually starts to take shape as a song at about thesame time it starts crashing my computer.

I guess I like to push the limitof my gear. Either that, or it's time for a new Mac."Although obsessed with the ability to create physically impossible soundswhile driving his equipment to the edge, Josh never lost his love for postpunk and Wax-Trax! era electronic dance music. With inspirations rangingfrom Berlin Electro to Skinny Puppy; from Amon Tobin to Dub, thecombination of stylistic influences plus an interest in 60's and 70'sEuropean soundtracks contributes to the sound of Aphorism. Now, Aphorismjoins Tympanik Audio for his fantastic and incredibly dynamic debut albumrelease titled 'Surge' with this showcase being his cd release party.