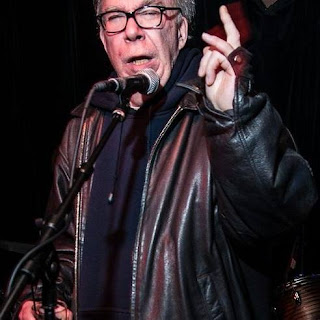 Aside from being a wellspring of Fortean knowledge, Mr. Meehan has been active either as a DJ at WZRD-Chicago in the 80s, a member of the pioneering Chicago freak-punk/no wave band Silver Abuse, or a noiser under the project Research Defense Squad still operable in some capacity since the 80s.
1.  What kinds of things have you been getting into lately?
I- Of late I've been collecting obscure Film Noir DVDs, continuing to immerse myself in late 19th and early 20th Weird fiction (and investigating the New Weird) and researching the Western Ceremonial Magic tradition especially the work of Jon Dee and his Enochian system of magic. Also continuing my studies of theoretical mathematics and physics and their relation to metaphysics.
2.  What you do, do you do it as an artist, or is it a hobby?  If you don't like that question, what do you have to say about true art (vs. "entertainment")?

2- I am a musician and no, it is not a hobby, it is a spiritual calling one that I am determined to continue with until I pass into another realm.

3- I sing, I write songs, I perform and record them with my band Silver Abuse. I am also collaborating with other musicians in some other projects later this year.

4- As a youngster I went through a period of learning my craft and as I got older was able to use the newfound abilities to explore the world of sound. Currently I am trying to use what I have discovered in these explorations to continue to make interesting music that will bring a certain amount of joy to those who listen to it.

5- Don't be an asshole. And treat animals with respect.

6.  Do you believe in psychics, magic, ghosts, or gods?  If no, then maybe you'll share your favorite conspiracy theory (whether you believe it or not).
6- Human beings have a certain amount of hubris in which so many people believe that they are the crown of creation. The universe is unimaginably vast (and unimaginably weird)and we are incapable of understanding even a tiny portion of it. I have had a lifelong obsession with the occult and the paranormal and have been a practitioner of various spiritual disciplines. Also, I happy to be a nice Irish Catholic lad because Catholicism is a wonderful fount of High Weirdness. As for my favorite conspiracy theory I really like the one that claims Hurricane Katrina was a form of weather warfare created by rogue Russian scientists in the pay of the Yakuza as revenge for the defeat of Japan in World war 2.
7.  What would you say was your most definitive experience?

8- A number of musical projects and collaborations that shall reveal themselves in time.
8.  Do you have any side projects that I am not aware of? If not, what is something you'd like people to know about you, that you don't think anyone would ever ask?


9.  Would you care to name any theoretical "desert island" records, or at least releases that you think are approaching your concept of "perfect"?

10- My cousin trying to drown me when I was three.

111- Yes. Some of my favorite artists are awful people. The idea that one has to be saintly person in order for their art to valid is idiotic.

12- There are people that I have admiration for but I certainly don't consider them to be heroes.
13.  What would you like to have on your epitaph?  Or what is your favorite quote?

13- ''It's my sincere wish that after my death, my head be severed and replaced with a bunch of broccoli. It's the artist in me.''
Posted by Arvo at 1:55 AM