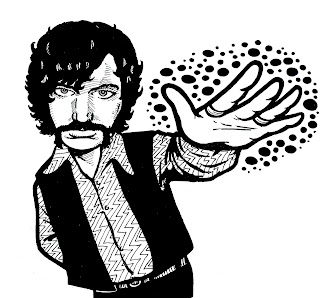 Scheduled on February 17, 2019
Where to start...  Steve Krakow, or Plastic Crimewave, has created a regular column for The Chicago Reader called The Secret History of Chicago Music, which also has an ancillary weekly radio show on WGN.  His hard psych/acid punk band, in its various incarnations, has been active for almost 20 years, and has extended to a "Celestial Guitarkestra", with at times as many as fifty or more guitarists performing.  There are a lot of other things that could be touched on here...  Krakow's music label, zine imprint, regular mix tape series, DJ gigs, and side projects. His home is said to be a museum of pop cultural artifacts, and he's just an all-around nice guy, with a ridiculous encyclopedic knowledge of music history.

Technically speaking, been "pro" since my early 20s, and freelance "just art" for 15 years
but on a deeper level, i think living your art in every way possible, because it is your natural inclination to do, is important.

In many ways a straight line, with interest in heady comics, music, films since my youth--but i suppose i prepared myself for a career in mainstream comics at first, got derailed by discovery of various other pleasures in life, and then picked up a guitar at age 19 and TURNED ON DUDE (ha)

Life is short and we're all doomed so pursue your dreams...

6.  Do you believe in psychics, magic, ghosts, or gods?

I want to believe in them. I def believe in forces we don't understand and energy being tangible...

Becoming one with the universe and seeing how all things were connected, it all made sense for ONE SECOND (or a million).

Hmm i have a lot of projects and no day job, so in many ways nothing is a "side," but currently playing in a more-occasional unit with my lovely lady and visual artist/flautist Sara Gossett, and my brother Adam aka Hands of Hydra called Spiral Galaxy--kinda mellow kosmische new agey vibe, slightly different than my usual thing, we're working on a layered record and we opened for and collaborated with Faust, which was dang exciting! Hmm, i guess no one knows i like 80s new romantic synthpop as much as i like any genre? Pretty big fan of mid-80s to mid-90s hip hop too...heh

10.  What is the earliest childhood memory you can (or are willing to) recall?
I have vague memories of my P's townhouse at age 3, it had a pink bathroom (we moved at age 4).

Actually,  I'm pretty happy with the distillation of my philosophy i came up with above in question #5, can i repurpose that here? ha
A quote I use a lot is David Thomas of Pere Ubu, who was describing "psychedelic music"--he called it, "Cinematic music of the mind"
Posted by Arvo at 1:33 AM